Worm gears are power distribution devices that are generally utilized as high-ratio reducers to alter the orientation of rotational movement, as well as to decelerate and boost force among non-parallel rotating parts. They are utilized on shafts having perpendicular, non-intersecting axis.

Worm gear is ineffective relative to other gear drives since the teeth of the seamlessly blended gear roll past one another, but they may create substantial decreases in velocity in really confined places and hence have countless industrial purposes.

The forged worm gear is essentially characterized as single- or double-enveloping, based on the shape of the meshed teeth.

Shacha Technoforge worm gears are offered in both enclosed and gear set configurations. Some devices are available with integrated servomotors or multi-speed designs.  For applications requiring high-accuracy reductions, special precision worms and negligible variants are offered.

Worm gear engines are solutions that use a 'worm,' that resembles a screw, to engage wheels. They are employed in situations when a fairly low speed and fairly large power augmentation are necessary. These motors are commonly employed in a wide variety of industrial applications.

Worm gears designed and forged by Shacha Technoforge are known to have the following benefits, which makes them unique.

Belt conveyors are a typical use for worm-gear reducers because the belts travel slowly compared to the engine, allowing for a high-ratio decrease. Whenever the conveyors come to a halt, the restriction to back-driving in through the drive shaft can be exploited to avoid belt reversing. Other popular uses include valve actuation, winches, and cutting tools. They are occasionally used for indexing or as highly precise motors in telescopic devices as well as other devices.

Worm gears are also employed in production and packaging. They are found in packing machines, smaller machines, and elevators. They are appropriate for this sort of gear due to the fact that they have lesser gear sets that achieve high gear ratios. These gear sets need smaller gearboxes, making them considerably space-saving. 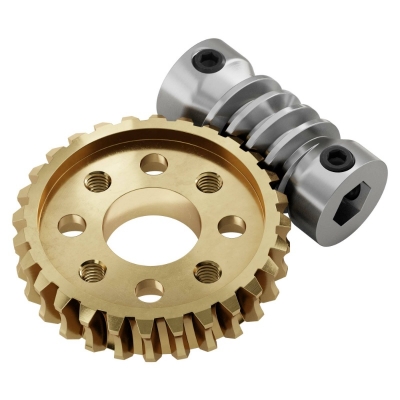